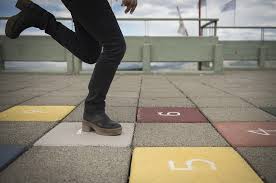 Everyone remembers playing hopscotch as a kid, jumping from one set of squares to the next, every other time having to do so on one foot. If one could get to the end without falling or missing a square, it was considered a successful run. It really wasn’t the most competitive game, but a game nonetheless.

In listening to Dr. Jordan Peterson’s podcast (binging 16 episodes over the weekend that is) there was something that stood out. There was a point where he briefly mentioned the advancements in science that have come up over the last century, and a lack of progress in the philosophy on modern ethics to accompany it. It was in the middle of another discussion, so it was somewhat glazed over, but it seemed worth elaborating on as this will come to mean much more as technology becomes more elaborate.

Obviously there are many things one could analyze in Dr. Peterson’s discussions, but because such a keen observation was overlooked, it was necessary to look into it. The metaphor of hopscotch is most likely confusing, so it should be cleared up. The statement Dr. Peterson made was in reference to technology outpacing the ability of the human race to grapple with the power at its fingertips and the lack of virtue that would prevent the technology from being misused.

This issue appeared during the cold war as a standoff between two nuclear powers (who were perfecting their nuclear capabilities) had the technology to destroy the world. With the digital revolution, increasing rates of technological innovation, and artificial intelligence around the corner, mankind will have to decide the ethics and virtuous behavior that go along with these technologies. That is where hopscotch comes into play.

The game of hopscotch is played by jumping from one foot to two feet moving forward. In the same way, mankind moves forward by increasing technologically (usually in bursts) and then finding a code of ethics that complements the technology. This really reflects the game hopscotch. As man progresses technologically, it jumps forward onto one foot. Then, as it discovers the code of ethics that is best to regulate behavior around the technology, it jumps forward again onto two feet. This stabilizes humanity and allows it to balance on both the technology and the ethics.

Advancements are often, maybe always, made first in technology. This is because scientific discovery is a journey into the unknown, and is therefore much less stable than the both combined. Ethics cannot move forward without a new paradigm or some existential question to be answered.  If there is no new question to be posed or new way of interacting with a society, former codes of ethics will suffice. Therefore, the hop onto one foot is when science takes a leap forward, and when ethics catches up, that is like when the participant lands on both feet.

By going through this process, all of mankind can move forward, but not fall. If it relied on simply hopping forward on one foot and not the other, it would be far more difficult to remain balanced. It is by alternating between one foot and two that humanity remains upright and progressing forward.

No one would argue that it is a seamless, alternating process, nor would one argue that there are no times when mankind wavers and nearly looses balance. However, it seems evident that this process is a good way to imagine the process by which man advances. Understanding the manner in which man moves forward will, hopefully, allow man to assess its current position- one that can vary from one society to the next.

The implications of these questions in a global world ripple throughout societies that do not even necessarily have an input on the discussion. That is why this is so crucial. All of the world could be at stake by any advancement in technology- a reality that came to light multiple times in the 20th century. All man can hope to do is stay upright and moving forward.

Join the Conversation of Our Generation!!!

SUBSRIBE to The Conversation of Our Generation’s Podcast now on iTunes!!

Want to learn more, but don’t know what to read? Check out my Amazon Affiliate Page, and use those links to shop for books to help you learn and grow!

Subscribe to our email list for our Recommended Reading, reviews on books and other content that can grow your store of knowledge. New products will be coming soon, exclusively for subscribers.

I am just trying to join the Conversation of Our Generation. Let’s get the dialogue going with comments, shares, questions- just say something!